Archive of "In the Night" 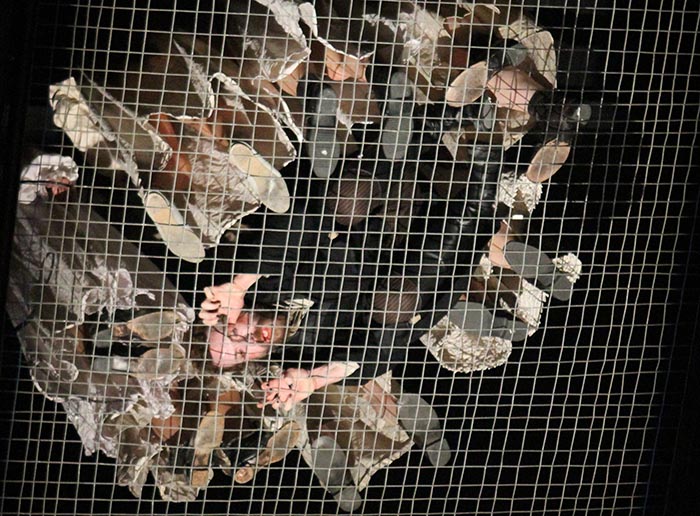 Beginning with the goal of connecting science and the arts, director-choreographer Martha Clarke explored the world of dreams. What happens in the brain when you dream? How are connections made between the waking world and the unconscious? Working with a cast of 17 students and faculty members drawn from the departments of theatre and dance, Martha created a haunted dreamscape. Figures raced across a grid high above the audience’s heads; a boat flowed through the space, half enveloped in fog; strange beings leapt from an unmade bed; the sound of words too distant to make out wrapped around a clown with an foolish nose; an old man in an overcoat grasped for memories scrawled on a million scraps of falling paper. For the audience, emerging from the performance was like waking from a strange, beautiful dream.

The fantastical science of dreams

In 2009, I saw the remounting of Martha’s Garden of Earthly Delights and remember feeling captivated by the sheer theatricality. I traveled alone that night to the off-Broadway Minetta Lane theatre and bought a student ticket in the front row. The building has character, as one might say, as it’s a bit off the beaten path and, well, there was paint peeling from the walls. The pretense of a Broadway theatre didn’t exist. It felt more like cinema art house—a place where one might go to watch a screening of Fellini. As I took my seat, a beautiful depiction of the Garden of Earthly Delights by Hieronymus Bosch spread before my eyes. The simple sets, costumes, and bold lighting framed one of the most beautiful moments of theatre I have ever seen: women were suspended by their feet and flown over the audience as men in very sheer flesh-colored suits spun them. The women began to rotate so quickly that their hair spun straight out and created the most beautiful circular pattern, which I had to look straight up in the air to see. Flash forward to fall 2009.

Martha was asked to come to Iowa to create a new work, and I jumped at the opportunity to dramaturg the project. Due to our funding, Martha was asked to create a piece based on a scientific theme or idea. She very quickly chose dreams and we began meeting with scientists in October 2009. Over the course of the next year, the contracts and dates were hammered out and Martha and I began with the natural material: Freud. As I was to learn, the true conceptualization would not be wholly informed by scientific research and theories. Rather, this dream would be born in rehearsals.

The first four weeks were dedicated to improvisation. Martha began working with performers one-on-one and slowly added more dancers and actors to the process. Various smaller collaborations were formed and performers brought in ideas with which Martha was shape and carve and explore. Slowly performers and dancers were added until we began improvising giant group scenes with 16 performers. Towards the end of our last process, we had an incredibly rough cutting of about 20-30 minutes of sequenced material. Whether or not that sequence remains is to be seen, but as the next phase of our process begins, I expect we will be piecing together the fragments into a coherent whole. Most of the characters were originated by ideas from the performers themselves and the actors were particularly astute at finding interesting dramatic language for the production. In the next few weeks, our lighting designer, Christopher Akerlind, and music director, Arthur Solari, will arrive and return, respectively, to shape the show. We will then go into tech. This program note will be printed and you will read these words. All I can say to you at this point is that the show uses light and image and bits of text. The material is psychologically deep, humorous, and representative of neoclassical and romantic beauty.

While I may not be able to tell you what the images mean, I can tell you how they feel. Images have affected our cast and crew in a profound and often private way and to many different ends. We have not selected elements based on any particular set of rules. Rather, we have played and rehearsed and moved and thought and watched over the course of many weeks and grabbed images and moments that responded to our minds and guts. We have had many artistic influences such as the paintings of Goya and Fuseli, the films of Fellini and Herzog, the texts of Dostoevsky and Lewis Carroll, and the ideas and skills of the performers. Some of the moments were preconceived and we experimented with the idea in rehearsal. Others were found by accident—perhaps someone unknowingly sat in an interesting manner or had a particular look on their face. Each moment in this process has been a surprise. While that sounds incredibly frightening and stressful (at times it is), it’s a liberating way to create art. In the hundreds of hours of rehearsal I have witnessed, I attempted to live freely and newly in each moment. I hope you will do the same.