Iowa Institute for Linklater and Alexander

“The Power of Presence Onstage and Off” 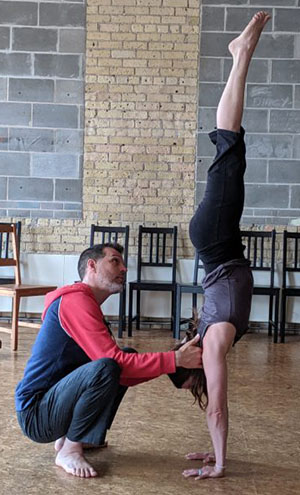 The institute’s 7-day immersion program for actors, performers, university professors, and other professionals will introduce participants to the Linklater methodology for voice and the Alexander Technique for movement led by designated and certified faculty.

Daily sessions will include small group and hands-on individual work as well as large group movement, voice, and text work.

Joe is an Internationally Certified Teacher of the Alexander Technique based in Minneapolis, MN. He served on the faculty at The Dell’Arte International School of Physical Theater (1999-2001, 2006-2014) teaching privately and group movement Alexander Technique classes, as well as at The University of Missouri, Kansas City’s MFA Actor Training Program (2001-2006). In addition, he has taught workshops or been in residence at another two-dozen higher educational institutions nationwide.  Joe is the co-founder of Soma Studios based in Minneapolis, MN and is the director of Soma’s Alexander Technique teacher training program.

Mary is a designated Linklater teacher with many years’ experience acting and teaching voice, acting and improvisation in universities and professional theatre training programs all over the United States including Shakespeare & Company, University of Maryland, NYU’s Tisch School of the Arts, University of Mississippi, Virginia Commonwealth University, and Syracuse University. She has an M.Litt/MFA in Shakespeare and Renaissance Literature in Performance from Mary Baldwin College and the American Shakespeare Center. 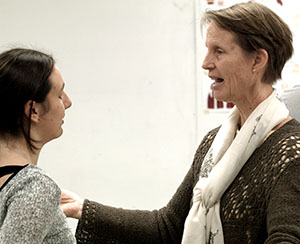 Mary has coached voice and dialects at Arena Stage, Roundhouse Theater, Ford’s Theater, Signature Theatre, and Chesapeake Shakespeare Company. She has performed with Chesapeake Shakespeare Company, Nelson County Shakespeare Festival, Hamner Theater, Kristin Linklater’s Company of Women, Ensemble Studio Theater, the Open Eye and Shakespeare & Company. Directing credits include The Waiting Room (at UMD), A Midsummer Night’s Dream, Richard II, As You Like It, and The Taming of the Shrew.  She currently is an Associate Professor of Instruction in the Department of Theatre Arts at the University of Iowa.

Kimberly is a Designated Linklater Teacher who lives and works in Seattle. She has worked with Seattle Shakespeare Company (2004-2012: Voice & Text Director), Prague, Lake Tahoe, Maryland and Sun Valley Shakespeare Festivals. She  trained, taught and has coached for the main stage at Shakespeare & Company in Lenox, Most recently she was text coach for an all-female production of Coriolanus at 12th Ave Arts in Seattle. Kimberly recently has focused on work with activists and advocates, specializing in persuasive speaking, witness preparation, themes and case stories. She is adjunct faculty at Seattle University School of Law where she teaches Oral Advocacy: Vocal Presence, Power & Persuasion. She annually co-leads with DLT Judith Shahn a week-long workshop for women in Mexico: “Let your Voice be Heard”.